Hola Amigos!!
I got a mail regarding Finite State Machine Code in verilog. Well I have prepared my own truth table set and sequence but it will sure help you all guys to design your own code of FSM.

A finite state machine is a state level design used to program such modules which require a decision on each step. We can take a game like GTA V. The game waits for the user for the directions so when we move the mouse towards right the game loads a scenario. When you turn the mouse towards left it loads a different scenario. It is basically like if "YES" I'll do this else i'll do that. Thus at a moment of time only a single state can be achieved and each state has two possibilities. It is the true or the false.

Machines are of two types.
a. Mealey Machine
b. Moore Machine

An example elaborating the working of Mealey Machine in a simple way  :) 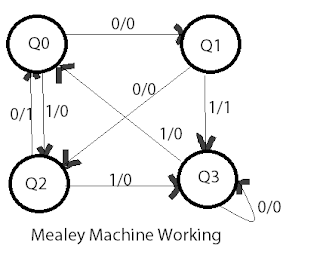 Making the truth table we get this
A mealey machine will have 6 columns. The first 3 and the last 3 are the same however the first 3 are for input X = 0 and the next three are for X = 1. What we have observed here is that every state will certainly have two output atmost and atmost N inputs where N is total number of states present in the mealey machine. According to the table we see that any state depends on X also as well as its current state. A Q0 will jump to Q1 only if it has an input X = 0 and this will only happen when state is at Q0.

An example elaborating the working of Moore Machine 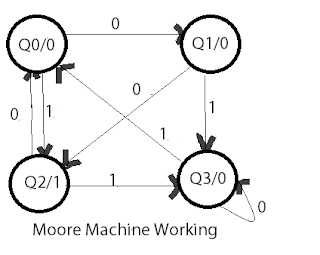 The truth table specific to Moore Machine is

Next state depends on the input as specified.
NOTE - It is the output which is dependent on present state. Do not confuse it with next state.


Difference between Mealey and Moore Machine


I am using Mealey Machine Design for this example
Thus outputs are determined by both current state and current inputs.

Here is the question 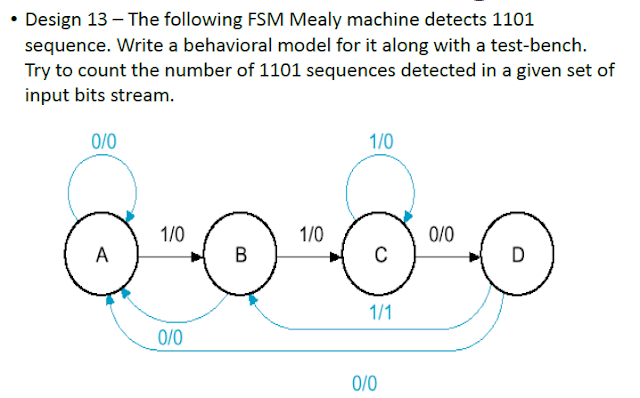 Thus you can easily see the required sequence is 1101

Let me explain a bit.
Initially we will always be at state A. When we receive input as 1 the we found the 1st correct bit of 1101. But still we didn't get 1101 thus for input 1 from state A output will be 0 and will jump to state B. If we get 0 then it is different from what we want hence machine will remain at state A with output 0. Now if we recieve 1 then we have found 11 of 1101 thus jumps to state C still output is zero since 11 is not equal to 1101. Similarly if we get input 0 then we have found 110 of 1101 thus machine jumps to state D with still output 0 as 110 is not equal to 1101. If inputis zero then will remain at state C. Now if we get input 1 at state D then we get our sequence 1101. Hence output is 1. The next state is B. However if we get input 0 then machine will jump from state D to state A.

I hope it is clearly understood. 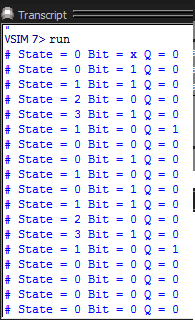 You can mail me at shashisuman17@aol.com for any queries