Hola Amigos
Here is the code for the parity bit checker in System Verilog
The output will be shown in the transcript.
I have used ModelSim sometimes using Xilinx iSim as second. 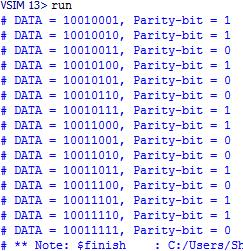