In this post, I'll deal with logic regression and its implementation of a single neuron network. I hope you have read my previous post on mattresses and its operation using NumPy package. You can click here to go to my previous post


A neuron is the primary and fundamental unit of computation for any neural network. A neuron will receive a vector that will include the input features. Each of the features will get multiplied with their corresponding weights and then a bias will be added to each of the features after which the weighted sum will be calculated. This will produce a linear output from the previous step. After processing the linear output, data will have to pass through the activation function.

The sigmoid function produces an S-shaped spanning across left and right plane. As per Wikipedia Sigmoid function is a bounded differentiable and a real function having a non-negative derivative at each. 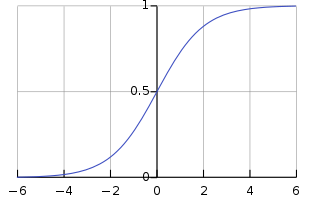 Weights and biases are responsible to adjust the input function which consists of features in order to bring the final output close to the actual output. Weights are multiplied with the features and then the bias component is added. The output has been passed to the activation function. Recently added from StackOverflow an interesting thing about the bias. As the name suggests bias means to favour something irrespective of whether that thing is right or wrong. Similarly, the bias favors the actual output by adding itself to the weighted sum.

Clearly, the above example was for a single input sample. What if we have multiple input samples? Well, the Logistic regression also works on multiple training samples. Suppose there are m training samples and each of the samples has n features then the input can be stated as M x N matrix. Let us call this matrix as X. Now we can easily perform dot product between X and the weight vector to get a linear output. The vector output will be then passed to the activation function which will result in an output vector A containing the probabilities of each training sample.

In the next post, I'll deal with the Loss function, Cost function and the implmentation of SNN (Single Neuron Network).